Goodness! Where has the time gone? It’s been six months since I’ve updated this blog which is not ideal since I’d really like to be consistent with documenting my personal history. Oh for the good old days of blogging where I couldn’t wait to post.

Anyway, since I last posted about my appointments to the Saracens Pioneers Volunteer Programme, I should speak about that. Things went particularly well during the season. My role involved being a part of the Saracens FC media team. That meant on match day, turning up bright and early to be briefed about the day’s schedule and then taking on a number of tasks related to the media. Contrary to what most might think, it wasn’t/isn’t really glamorous work but I thoroughly enjoyed the experience. Not only did I interact with folks on the Saracens media and management team, but also the players, journalists, photographers and most of all the fan who make the experience truly memorable. And so will definitely be back next season. 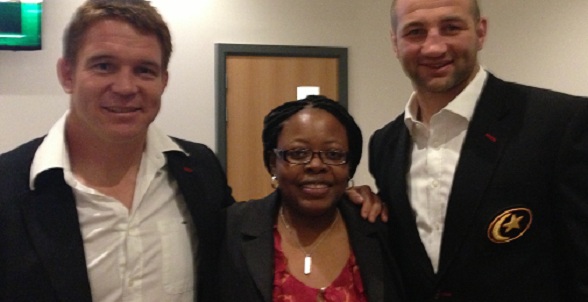 Heck, so intrigued with rugby these days that I also applied for and got a position on the media team for the Rugby League World Cup 2013. Fourteen nations will compete later this year for the World Cup and I’m actually on a train to Manchester now for the launch of the volunteer program. It’s all so exciting and so really thankful for my London 2012 experience which has brought forth these new opportunities.

Another recent opportunity involved helping out during the London part of the Longines Global Champion Tour organised by Peter Philips, the eldest grandchild of the Queen. During the briefing Peter was rather personable and engaging that couldn’t help but think that he would have made a wonderful future king. Of course, that will never be since his mother, the eldest of the Queen’s children got superseded by Prince Charles. Interestingly, he doesn’t even have a royal title.

Anyway, so what is the Longines Global Champion Tour all about? Well it brings together the world’s best in show jumping who compete for a trophy as well as a considerable amount of money. There were also fantastic demonstrations on dressage better known to most as horse dancing. For this event, I was not on the media team, but it was still lovely nonetheless to be up close with the riders, trainers as well as some of the finest horses on the planet. Just spectacular!

So what’s happening on the work front? Well I started a new digital marketing position mid December. It’s not in the travel sector but I am definitely making the most of the experience as this ultimately will be my last corporate assignment. Why do I say this? Well I think once you’ve got the entrepreneurial bug, it’s difficult to just be content with being a worker bee; no matter how much money or advancement comes with that. Ultimately, you want to do your own thing. So I continue to provide marketing and public relations support to Caribbean based or inspired businesses via Moxee Marketing. Ultimately, I’d like to move somewhere in the Caribbean. Montserrat would be the logical place, but the market is too small and so will have to look to one of the bigger islands; perhaps the British or US Virgin Islands! Of course, this will all take time so I’m on a 5 year plan. Ultimately though, destiny will take me where I need to be.

Speaking of destiny, I recently reread Paulo Coelho’s fantastic novel, The Alchemist. It was a reminder to self that while it’s good to dream about pursuing adventures, fortunes and even lovers in distant lands, I also need to be more present and open with what’s happening around me because my treasure or future husband could actually be on my doorstep. And so I’ve been trying to move away from anything and anyone that I perceive to be holding me back. This includes Basherter as for nearly two years, I’ve been totally hung up on him. He helped to restore my faith in men and what started as just a genuine friendship involved into a full blown fantasy that we’d one day live happily ever after. This is despite the fact that an ocean currently divides us and oh yeah, we’ve never spent any significant time together face to face. Much of our almost daily interaction has been via the phone, email or instant messaging. But hey, that’s just a minor detail right?

Anyway, much to my surprise, a few months ago he told me that he LOVES ME (yes he used those words), but he wasn’t ready for a relationship, particularly a long distance one having just come out of another long distance relationship. So after struggling with this news, I cut him off. Why? Well I’d never before had a man tell me he loved me but didn’t want to pursue a romantic relationship. I felt cheated and while perhaps not intentional on his part, I felt his confession was mental manipulation. So I just stopped responding.

So where are we now? Well we’re communicating again. You see, he came to London unexpectedly and so we reconnected. And while there was instant chemistry, our interaction was very much PG rated. We simply spent time together exploring London and talking about our evolving friendship. So will anything happen in the future? I don’t know, but I’m not going to dwell on it anymore. It’s simply not the healthy thing to do. What is healthy is that I continue to be socially active and perhaps sign up for eHarmony.com again! I didn’t have much luck during my initial experience on the site, but timing is everything. So definitely think I’ll give it another go since I know quite a few people who’ve met a significant other on the site.

Finding a soulmate/life partner who is committed to me is ultimately what I desire. Of course, this will NOT be a new revelation to long-time blog reader. It’s what I’ve blogged about on and off these past 10 years. Children would also be nice but I’ve got to be realistic considering my mature age. Sure there are lots of women in their 40s have children, but is this something I still truly desire? Not so sure anymore. Of course, having the right life partner could reawaken my desire for a family. So let’s just see what happens. I just love the fact that I’m in control, but really destiny will ultimately decide my faith.

The saga with RacquetballGuy continues. What now, exactly? Well, after saying that I didn't want…

Yup.  You read that correct.  After nearly five years of no contact, RacketballGuy suddenly reappeared…

10 Reasons I Don’t Want To Be Your Mistress

So yet another long period of not writing on the blog.  I'd ask for forgiveness,…