I am experiencing Olympics Withdrawal Syndrome – not just because I was a volunteer performer during the Opening & Closing Ceremonies, but also because I got to attend a few events; quite a few in fact.

How was that possible when everyone kept screaming about the lack of available tickets? Well luck really! I had applied during the initial ballot and was successful in gaining tickets for: Beach Volleyball – Preliminary Round, Men’s 3M Springboard Diving – Final and Women’s Football/Soccer – Final. As I had gotten 4 tickets to each event, I took different lots of friends. And through one of these friends, I also got to see BMX Cycling – Seed Run. Finally, I also watched some of the street events, Women’s Marathon and Women’s 20km Race Walking and Men’s 50km Race Walking.

So really, I’ve had the full experience as in addition to the above, I watched countless hours of the sporting events on TV and I’d even gone out and watched the torch pass through Bromley. So how am I getting over the syndrome? Well, I’ve watched the Olympic Ceremonies a few times as there is so much happening in each one that I see new things. Also, I’ve watched some of the major sporting events again – in particular the athletics on Super Saturday (4th August). So named by the British Press as Team GB won 6 gold medals – the most spectacular being the 3 gold medals won during a span of 45 minutes in the Olympic Stadium.

It started with Jessica Ennis who proved that she really is Britain’s golden girl by winning the heptathlon. Then Greg Rutherford made a flying leap of 8.31m to win the long jump. This was topped off by Mo Farah who became the first Briton ever to win gold in the 10,000m. I watched this all while WhatsApping Basherter (Yes, I’m still speaking to him – more on that later!) and so that made it all the more memorable and special as he is extremely knowledgeable about track and field. 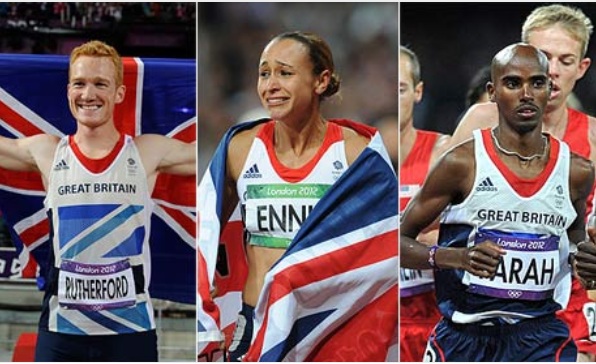 So what to do now? How to achieve that magical euphoric feeling again? Well, it’s not easy. For 17 days the British people were on top of the world. This all kicked off with the amazing Opening Ceremony and carried through the sporting events. Sure there were some hiccups around tickets but the weather held out, the military did a superb job with security and getting to the venues wasn’t a problem. Plus the images from the various venues across London were spectacular. So it was great to live in a country where the majority were proud and waiving their flags high. I loved that and do so hope it continues as I very much like to live in a country where most people’s glasses are HALF FULL and not HALF EMPTY!

That all being said, up next for me in being an Audience Leader in the Paralympics Opening & Closing Ceremonies. Rehearsals have begun and once again I’m trying to make the most of the experience. This for now, is my temporary solution to my Olympics Withdrawal Syndrome.