The riots in London and elsewhere in the UK almost got the Notting Hill Carnival cancelled. Luckily, the organisers after consultation with Mayor Boris Johnson, the police and other officials decided to move forward. The compromise was that the event would end slightly earlier.

Now even before the possible cancellation, friends had tried to talk me into joining a troupe. I resisted. Not because I didn’t think it would be fun; mores because I knew that parading through Notting Hill for 8+ hours would be exhausting. And yeah, there is the question of facilities; toilet facilities to be exact. I get obsessed about these things.

Anyway, from what I could see, the first day of Europe’s largest Caribbean inspired street festival went rather smoothly. I suppose the 5,000 Metropolitan Police on the street had something to do with that.

Also, carnival has simply always been about having a good time. Meaning, the more than one million people who come to this two day event, do so to: view the elaborate floats, eat some yummy Caribbean food, drink a pint or two, dance a bit and just genuinely have some fun!

So it’s good that things progressed as the scale of this event makes it a near dress rehearsal for the upcoming Olympics next year. By the way, have I mentioned that I have tickets for the Olympics? Can’t wait! It’s going to be epic!

Below is one of my favourite pictures taken at Notting Hill Carnival 2011. Yeah, its of a cop being “wukk up” on from both sides! Luckily she had a sense of humour! 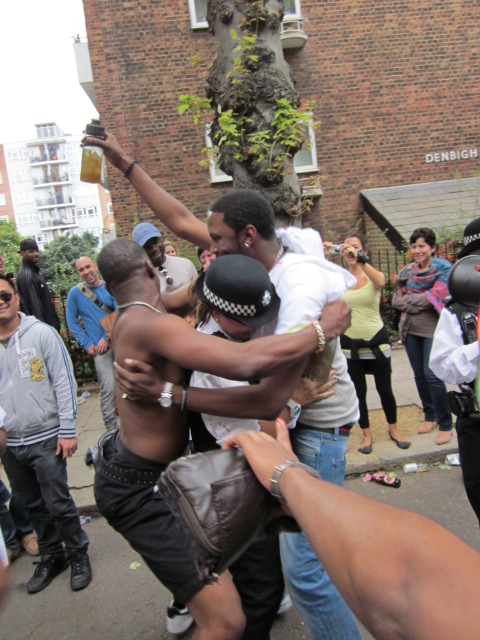 You can view more in my Day Out: Notting Hill Carnival 2011 Facebook album!