Wondering what the heck global skin care company Nivea was thinking when they approved marketing campaign below. 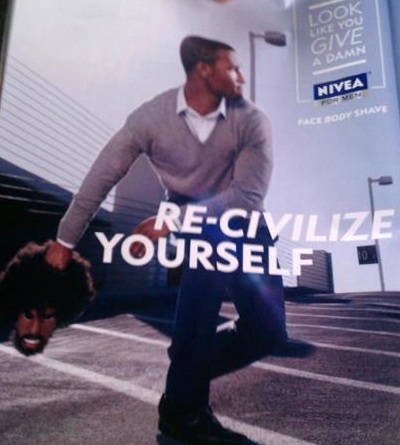 As you can see, it has a neat-looking black man holding a decapitated afro haired version of his head with the words ‘Re-Civilize Yourself’ plastered over the picture.

Seriously! Come again! In the year two thousand and eleven, you’d think that a major brand like Nivea which has Rihanna as a spokesperson would have realised that a storm would brew from this ad.

Now I’m not one to jump on the politically correct bandwagon, but with the additional words “look like you give a damn” this ad campaign is completely inappropriate, culturally insensitive and borderline racist. Thus, how this got approved requires an internal investigation and perhaps some reflection on the part of Nivea’s marketing management team.

Because really, are they trying to suggest to the millions of black people across the globe — men and women — that wear their hair natural that they don’t care about their looks or that they are not civilised? Enquiry minds want to know.

Yesterday I went to a casting to be in a Dove commercial. I'd received the…

Via one of my favourite blogs: Afrobella, I came across a New York Times article…