The London 2012 Olympics Closing Ceremony was incredible. It wasn’t as emotional as the Opening Ceremonies but had a good time nonetheless despite the fact that I was a bit nervous. Why? Well we didn’t have much time to rehearse. Actually, truth be told the only rehearsal pre show day for the Mechanicals was cancelled as we needed to be in the stadium. Of course that wasn’t possible as the athletics were still in play. Then on show day, we had an abbreviated rehearsal. But hey, our group were now pros and so we winged it!

Beyond interacting with my audience in Section 237, I also had the honour of being a marshal – really holding the audience back in Section 138 while athletes from Argentina, Cuba, Barbados and a host of other countries came through onto the Field of Play. I was so excited. Actually, I was beyond thrilled as while I’d gone on the Field of Play at the end of the Opening Ceremonies, I hadn’t been up close with the athletes. Most were gone by the time I got there. So the ability to greet and Hi-5 many as they came through was wonderful. 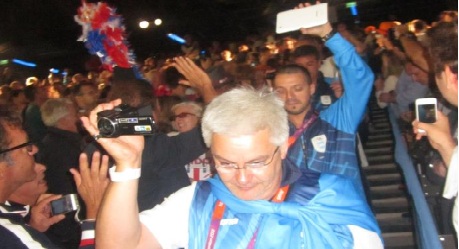 Everyone was in good spirits as the 16 days had all been spectacular. And so while many like me didn’t want the games to end, we were appreciative of the party – really the British symphony of music that would help close things out. It was great to see performances by: Emeli Sande, Madness, Pet Shop Boys, One Direction, Ray Davies, George Michael, Jessie J and Annie Lennox. Oh yeah, how can I forget the Spice Girls and Take That. I enjoyed them all.

And so when it all came to end, the cauldron extinguished and Olympic Flag was handed over to 2016 hosts Rio de Janeiro, I like everyone else in the stadium gave a rousing applause. I clapped to thank the athletes for part-taking and really to thank everyone who had a role in making the London 2012 Olympic Games the greatest ever! Granted I’ve watched most of the previous games from afar, but I do genuinely believe that London 2012 has truly outdone all the others. London with its rich history and friendly people charmed the world with a party of a lifetime.

Note: For more pictures taken throughout the ceremony, you can view my Facebook album titled: London 2012 Olympics Closing Ceremony. Enjoy!