My participation in the London 2012 Opening & Closing Ceremonies as a Mechanical/Audience Leader was beyond amazing. I met lots of interesting people from all walks of life and got to perform before an audience of 80,000+. I quote this figure and not the television audience figures of 3 billion+ for each Ceremony as I didn’t make it on TV. Our group performed and interacted with the audience to keep them entertained and involved at various stages throughout the Ceremonies, however as we were not on the Field of Play, much of this wasn’t shown on TV; well not at the individual level anyway.

I’d be lying if I said I wasn’t somewhat disappointed, as this was one of my initial goals but so many wonderful things happened to me throughout the entire journey that I’ve moved beyond this. Particularly as I’ve made a few new friends and have lots of souvenirs and pictures to show that I helped to make the London 2012 Ceremonies happen. Heck, you can find me in section 237 of the Olympic Park at the Opening Ceremony on 27th July wearing the Super Mario inspired costume in the Sports Illustrated Opening Ceremonies Gigapan created by photographer David Bergman.

David made the composite photo by shooting 425 individual photos in a grid pattern (25 across by 17 down) during a one-hour time period as the athletes entered the stadium. As this was near the end, he captured me standing around, hands in pocket really just mesmerised by it all.

Interestingly, while the Ceremonies itself were a real highlight, it was the action leading up to the Opening Ceremony that is perhaps the most memorable. Particularly once we got to the Olympic Stadium and things began to reveal themselves. Beyond emotional I tell you. What was so emotional? Well, our group – The Mechanicals/Audience Leaders got to help the production team practice the Parade of Athletes portion. This was to ensure that enough time was allocated to each country depending on the number of athletes. And so during these practice sessions, I had the distinct honour of being an athlete for: Estonia, Surmaine and Great Britian. I was also flag bearer for: Cameroon, Kenya, Nigeria, Mauritius, and Latvia. But what really got the emotions going was carrying out the flag for the United States of America. Knowing that America would dominate the Olympics and this was a great honour that few would ever experience, I carried the flag high and proud as for that moment, I was the chosen representative for country 194 – The United States of America.

Considering the complex history of the Barzey family and our migration to the United States, it was all rather surreal and a memory that I will treasure for a lifetime. That applies to the whole experience; the auditions, the rehearsals and even the hours spent waiting around –everything. It was magical as I saw things develop and got to perform as well as see the Ceremonies from start to finish several times over. SIMPLY AMAZING! 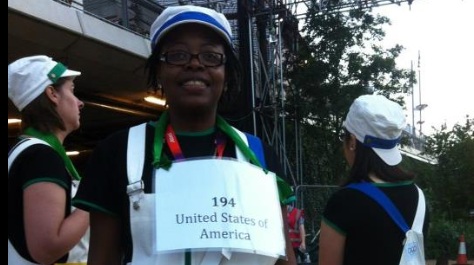 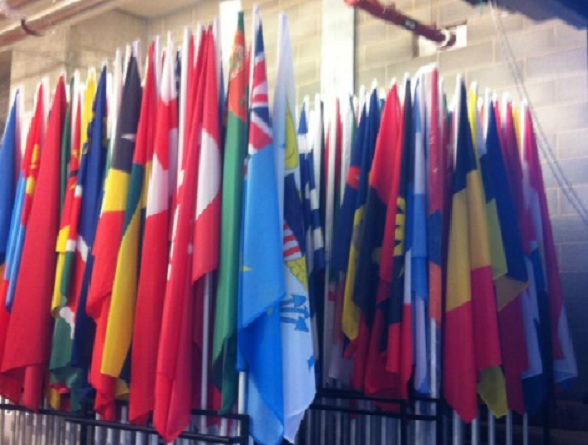 Note: American fencer Mariel Zagunis would ultimately be the flag bearer for TEAM USA. The 27-year-old who had won gold medals in the individual sabre at Athens 2004 and Beijing 2008, was nominated by her fellow Team USA athletes to lead them out during the Opening Ceremony. During the Closing Ceremony, this honour was given to Track and field athlete Bryshon Nellum, a first-time Olympian who ran the lead-off leg for the silver-medal winning men’s 4x400m relay who finished in 2:57.05.