Want to figure out a Londoner? Then according to a recent New York Times article, you can make a snap judgement by the newspaper he or she is reading. Specifically: 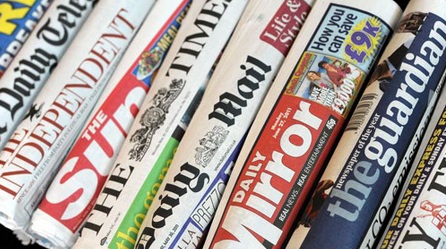 The Daily Telegraph: Older conservatives who mourn the loss of the empire by placing cricket before family. Last truly happy on D-Day.

The Guardian (or The Observer on Sundays): Bikram-practicing middle-class liberals preoccupied with ending all wars and rolling their own cigarettes.

The Times of London: Definitely a member of the political and corporate elite; fancies him-or herself as tolerant; has zero middle-class friends.

The Independent: Slightly depressed and overeducated underachievers who are really worried about the environment.

The Daily Express: Intolerant, easily outraged and yet to recover from Lady Diana’s death. Constant fear of terrorist attack is blunted by gin and reality TV.

The Daily Mirror: A really great night out starts with binge drinking at the greyhound track.

The Sun: Beloved by working-class conservatives eager to read a tabloid that goes for the jugular whether the topic is politics, soccer or topless women.

So does this hold up with me? Well I purchase the sunday edition of the The Times of London quite regularly. And before they started charging, I would read it online pretty much every day! It was without a doubt, my paper of choice. Now I read The Guardian daily online. So am I middle class and preoccupied with ending all wars? Yes to some degree. But due to previous yoga injury I’m none practicing and oh yeah, I don’t smoke. So only partly right. Of course, I’m not a proper Londoner. But then, very few people who live in London are actually from London which is why it makes it so difficult to figure people out!