I woke up feeling tired yesterday, Sunday. And as it was raining, I planned to just stretch out on the couch for much of the day.

However, around eleven, decided to check out Brixton Splash a free community street festival.

Now considering the riots in Tottenham, Brixton with its troubled history is probably the last place most people would think to go. However, because it was a family type event in the middle of the afternoon and I knew the police would be out in force, decided to give it a whirl.

I really wanted some jerk chicken with rice and peas – and as the festival would have a Caribbean flair, I thought, why not go! Plus I could also pick up some additional supplies (fish!) for the week.

So after putzing around a bit more, got myself together and managed to get to the event around 2pm. The police were indeed out in full force. They were at the train station and walking throughout the event.
I proceeded to walk around for some time jamming to the mostly Reggae music and people watching. I was also trying to decide which food stall I was going to eat at. I figured if I was going to blow my diet eating starchy calorie rich foods, I wanted to select the best option. That I would size up from the BBQ grill and number of people around the stall.

While in search, I found a stand selling coconuts for £2.50 each. Like the mango on Saturday for £2, while expensive, I just couldn’t pass it up. This was yet another thing I hadn’t gotten enough of while in Montserrat. So I drank the delicious coconut water and then eat the jelly. I almost got some sugar cane too, decided to save that treat for another day. 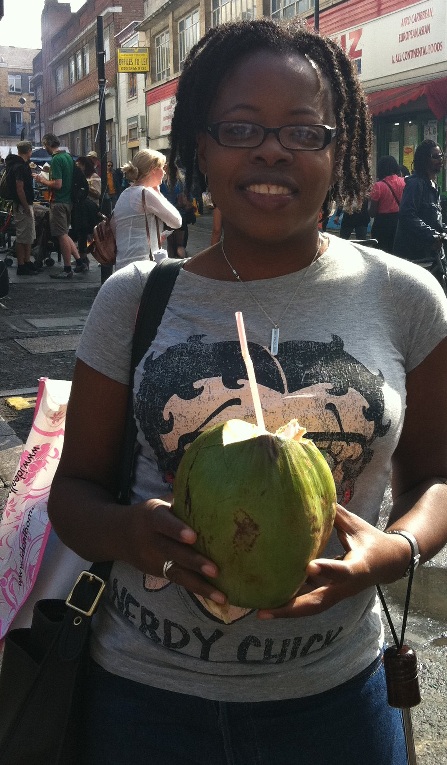 In any event, after the enjoyment of the coconut which totally made my day, I walked around even more, chatted to a few people and then settled on a place to purchase what would be my dinner. And in that I didn’t want to eat standing up, I decided to take it home. I really wanted to savour the food as I knew it would be some time before I would eat like this again.

Why? Well I don’t know how to cook Caribbean food. I know, scandalous! But in my defence, I was never in the kitchen growing up as a child and I thought I had a lifetime to learn from my mother. That was not to be. And now I’m better at cooking Italian dishes like lasagne than dishes that are native to my culture.
Shame really. Perhaps I can find someone to give me lessons. Or maybe I’ll meet a nice man of Caribbean heritage who knows how to cook. Wishful thinking, but hey – a girl can still dream!