A Letter from the Prime Minister

A Letter from the Prime Minister

When I initially applied for and was accepted as a London 2012 Ceremonies Volunteer Performer, the furthest thing from my mind was getting praise for partaking. Sure I would end up spending hundreds of hours rehearsing, but as so few had this opportunity, I was ever so grateful.

That said, as the games got underway, some of the other ceremonies volunteers felt slighted particularly as much praise was being showered on the 70,000+ Games Makers. This I wasn’t really surprising as the Games Makers had the McDonald’s PR machine behind them. But more importantly, the Games Makers were who the public interacted with when they went to one of the London 2012 sporting events. Thus, it was natural that when praise was/is doled out, they’ve gotten most of it.

Heck, even Mayor Johnson’s 8,000+ London Ambassadors haven’t gotten much press mention. That being said, I do think the media has been quite lazy about things and were in fact including all volunteers under the “Games Maker” banner. Heck while watching the Paralympics Closing Ceremony, I heard one of the Channel 4 broadcasters indicate that there would be 600+ Games Makers on the Field of Play. He was of course referring to us Audience Leaders and Marshalls and while we have definitely helped to make the games, our role is not that of a Games Makers, we are Ceremonies Performers.

Either way, it was all fine with me. As I said, I didn’t sign up with the expectation that I would be praised for being a volunteer performer. And really no words of thanks/letters/medals from officials can top the memories and new friendships that I’ve formed.

That being said, I was beyond surprised and a little touched to receive the letter below from Prime Minister Cameron personally thanking me for being a ceremonies volunteer. 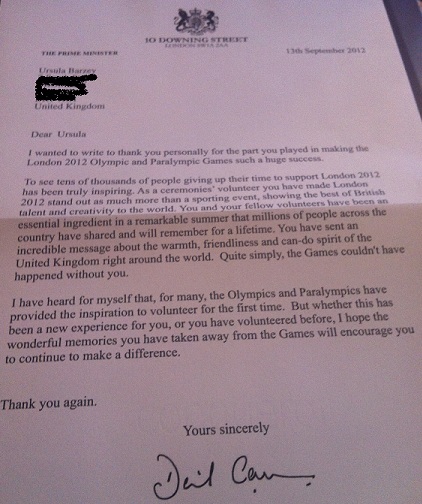 So yet another thing to add to my memory box that is brimming with souvenirs including all four costumes, pins and ceremony programs. Should note that my name is listed in each program at the back under the volunteers section and so years from now, this will be my definitive proof that I was there and helped to make London 2012 happen.